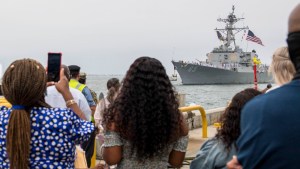 Reports of the escape of hazardous fumes on the USS Mustin at BAE Systems on Belt Street in Barrio Logan went out at about 10 a.m., Navy spokesman Lt. Ronan Williams said.

Emergency crews had the leak under control by shortly before 11:30 a.m., according to the San Diego Fire-Rescue Department.

Paramedics treated two sailors for trauma of undisclosed nature and severity at the scene. They took one of the victims to UCSD Medical Center in Hillcrest for further evaluation.

Though it was not immediately clear what type of vapors were involved, the “source of the leak was found and isolated, and both (affected) spaces were found to be safe for entry,” according to Williams.

“The incident remains under investigation,” he said in the late afternoon.