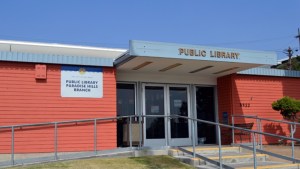 The city’s branch library in Paradise Hills. Courtesy of the city

Supporters of parks and libraries announced plans this week to gather signatures for a November 2024 ballot measure to create a protected funding source in the city of San Diego.

Libraries and Parks for All, an effort backed by the Library Foundation SD and San Diego Parks Foundation, is proposing a 2 cents per square foot annual parcel tax to raise $45 million annually.

If the measure is approved by voters, the funds raised by the tax would be protected from being spent for purposes other than libraries and parks.

“If you have ever wanted a better library, a better park, a better community, this ballot measure is for you,” said Patrick Stewart, chief executive officer of the Library Foundation. “This is our chance to guarantee every San Diegan has access to world-class neighborhood amenities.”

Supporters say many of San Diego’s libraries and parks are dilapidated and unsafe, with libraries suffering from a $50 million construction backlog and parks needing $200 million just for basic safety repairs.

Funds from the tax would be used for for academic programs, homeless outreach at parks and libraries, free public Wi-Fi, safety and security improvements, rehabilitating aging facilities, and expanding libraries and parks in communities that need them most.

Kickoff of the signature drive is scheduled for 1 p.m. to 3 p.m. on Saturday, July 9, at the North Clairemont Recreation Center.

The group plans to collect and submit at least 82,566 signatures from San Diego voters by Dec. 15.