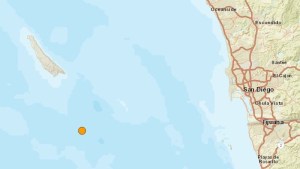 U.S. Geological Survey map shows the location of the quake.

A 3.6-magnitude earthquake was recorded early Wednesday off the coast of San Diego south of San Clemente Island.

The quake struck 15 miles deep at 3:28 a.m., according to the U.S. Geological Survey, and was felt by some residents of San Diego.

The epicenter of earthquake was 68 miles west of La Jolla and 63 miles south of Avalon on Santa Catalina Island.

No injuries or damage were reported.

San Clemente, which is used by the Navy and Marines for training, is the southernmost of the Channel Islands of California.