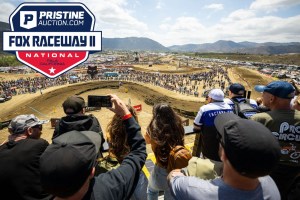 The Fox Raceway II National will commence on Saturday, Sept. 3, headlined by the closest title fight in the history of American motocross. Photo courtesy Align Media

Looking for something to do on the unofficial end of summer Labor Day weekend? Keep reading.

After a summer filled with one of the most memorable and competitive seasons of all time, the 50th Anniversary of the Lucas Oil Pro Motocross Championship is set to crown champions as it returns to the motocross epicenter of Southern California for a dramatic finale that will kick off Labor Day weekend from Pala’s Fox Raceway in San Diego County.

The Fox Raceway II National will commence on Saturday, Sept. 3, headlined by the closest title fight in the history of American motocross.

“During such a major milestone season we should be treated with the most compelling championship battle in motocross history,” said Davey Coombs, president of MX Sports Pro Racing. “The incredible action on the track that we’ve been treated to this summer has only been surpassed by tremendous crowds that are amongst the biggest we’ve seen in many, many years. Hundreds of thousands of passionate motocross fans have cheered on these exceptional athletes from all over the world and there’s no better place to watch the culmination of this historic season than Southern California, the proverbial home of the sport.”

Fox Raceway kicked off the 2022 season over Memorial Day weekend in May, with an event that featured the venue’s largest crowd to date that set the tone for the exceptional season that unfolded throughout the summer.

The sprawling landscape sits on the Pala Reservation of the Pala Band of Mission Indians and has served as one of motocross’ most high-profile Southern California venues for more than a decade. Its desert setting, with dry, arid conditions, makes for one of the sport’s most unique challenges that when combined with the high temperatures of late summer, will provide a significant final test of physical and mental fortitude for these world-class athletes. The riders who emerge triumphant at the season’s final event will be deserving of their success.

Chase Sexton (23) and Eli Tomac (3) have enjoyed a historic battle for the 450 Class championship in 2022 and will square off once more at Fox Raceway.
Photo: Align Media

Headlining the anticipated battles that will unfold at Fox Raceway is arguably the greatest championship showdown of all time in the premier 450 Class between Colorado’s Eli Tomac, a multi-time champion, newly named ESPY Award winner, and one of the most decorated racers in history, and Illinois’ Chase Sexton, an up-and-comer amid a breakout season that has pushed him to the brink of stardom.

With four wines, just a single point separates Tomac and Sexton as they enter the 12th and final stop of this landmark season, the smallest margin in a championship battle over five decades of competition. This showdown of veteran experience versus ascending talent has captivated the global audience of the world’s most prestigious off-road motorcycle racing series and will reach its crescendo at Fox Raceway, where both riders have won twice, to put an exclamation point on a season that will forever be remembered in the annals of the sport.

Australian Jett Lawrence is on the verge of capturing his second straight 250 Class title at just 19 years of age. Photo: Align Media