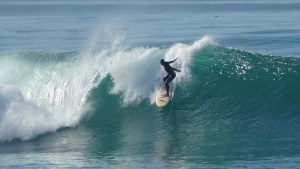 What some meteorologists are calling a “historic” ocean swell originating in the Southern Hemisphere is expected to peak Tuesday afternoon in San Diego with waves of up to 8 feet on southwest-facing beaches.

The swell caused waves as high as 20 feet in some parts of Hawaii over the weekend, but will have much less of an impact on the California coastline.

The National Weather Service office in San Diego said surf will be highest from Ocean Beach south and from Encinitas north into Orange County.

The swell is expected to peak at 3 feet with an 18-second cycle on Tuesday afternoon, then be followed Wednesday afternoon by a south swell.

A high surf advisory is in effect from 11 p.m. Monday until 8 a.m. on Thursday

“Strong rip currents and dangerous  swimming conditions are expected through the week,” the weather service said.