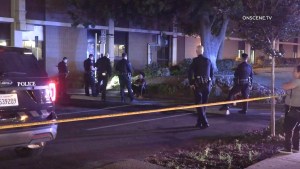 A man accused of fatally shooting a teen while the victim and his friends drove away from a house party in the College Area pleaded not guilty Thursday to murder.

David Rasean Vereen, 22, is accused in the June 25 shooting of Kevin Burton, a recent Grossmont High School graduate. Burton was set to attend San Diego Mesa College in the fall.

Police said the victim and others attended a party near 4800 Art Street that night. After leaving, Burton was shot while their vehicle turned onto El Cajon Boulevard, San Diego police Lt. Jud Campbell said. He died at a hospital.

A second bullet struck an apartment complex window on El Cajon, Campbell said, though no one was injured.

A suspected motive for the shooting has not been disclosed. Campbell said detectives were working to determine whether there was an altercation or incident at the party before the shooting.

Vereen was arrested on July 1. Police have not disclosed they identified him as the suspected shooter.

In addition to murder, Vereen is charged with two counts of shooting at an inhabited, occupied structure or vehicle. The criminal complaint alleges he fired gunshots at a vehicle and a residence.

Vereen remains in custody without bail.