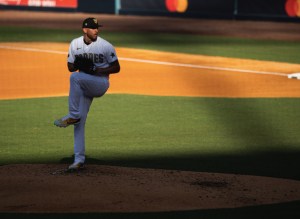 The National League clashed with the American League Tuesday at Dodger Stadium, with the AL emerging as the 3-2 victor in the 2022 All-Star Game.

Padres Manny Machado and Joe Musgrove appeared early and made their presence felt.

Machado, voted in as a starter, hit into a hard-luck double play in the first inning, thanks to a dazzling snag and behind-the-back toss by Cleveland second-baseman Andrés Giménez.

The NL got off to a 2-0 lead nevertheless, thanks to an RBI single by Dodger Mookie Betts, who drove in Atlanta’s Ronald Acuña Jr., and a solo home run by Cardinal Paul Goldschmidt.

Jake Cronenworth spelled Met Jeff McNeil at second base in the sixth, and had two at-bats – including the final of the game when Cleveland’s Emmanuel Clase struck him out swinging.

The AL pulled ahead in the fourth on back-to-back shots by Yankee Giancarlo Stanton, a two-run blast, and Minnesota’s Byron Buxton off Dodger Tony Gonsolin. Stanton ended up as the game’s MVP in the AL’s ninth straight All-Star victory.

Dodger Stadium hosted the event for the first time since 1980, with Los Angeles great Fernando Valenzuela throwing out the first pitch. The Padres had their turn in 2016, when the team welcomed the Midsummer Classic.