All Stars Head to L.A. As Padres Fall 3-1 to Close Out First Half 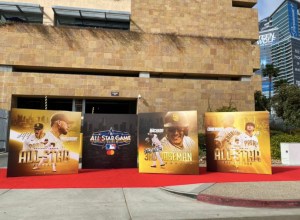 The Padres finished the first half of the season Sunday with a 3-1 loss at Petco Park, after winning the first two games of the series against the Arizona Diamondbacks.

Before turning to the serious business of the second half, though, three Padres head to Los Angeles to be part of the All-Star Game at Dodger Stadium. That includes Jake Cronenworth, a late addition to the roster after Marlin Jazz Chisholm bowed out due to a back strain.

The infielder joins Manny Machado, who fans voted in for the game, and Joe Musgrove.

All-Star festivities begin at 5 p.m. Monday with the Home Run Derby on ESPN – though the Padre reps to the game aren’t part of it – and Tuesday’s game, at 5 p.m. on FOX 5 San Diego.

Machado paced the team during the first half, and though he has slowed down, he finished Sunday with a .303 average, 15 homer runs and 51 RBIs.

New addition Luke Voit, though he has not hit for average, has added power, knocking 12 homers, including one Sunday. Cronenworth recovered from a miserable start to not only make his second All-Star Team, but also to trail only Machado in RBIs with 49.

Musgrove has stood out, with a 2.42 ERA, but he and Yu Darvish both lead the Padres with eight wins. Times have been tough, though, for Blake Snell, who only recently snagged his first win of the season.

Newcomers Sean Manaea and Taylor Rogers have made their marks as well; Manaea has gone 5-4, though his ERA has hit 4.11, and Rogers has 26 saves, though he no longer leads the majors in the stat.

Manager Bob Melvin seemed downcast in his post-game remarks Sunday, after a game in which his team made two errors and managed no walks, as compared to Arizona’s six. He conceded that “probably the break comes at a good time for us.”