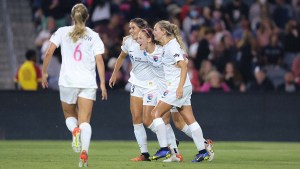 Promoted as a growing SoCal rivalry between expansion teams, the game saw momentum swing back and forth with host LA holding the 2-1 lead in the closing minutes.

Before an announced crowd of 22,000 at Banc of California Stadium about 120 miles up the coast, Claire Emslie, newly arrived from Everton of England’s Women’s Super League, put Angel City in the lead.

In the 60th minute, San Diego midfielder Kristen McNabb evened up the score with her first goal of the 2022 regular season, beating the Angel City keeper with a perfect slot from the right, putting the Wave back in the game.

After scoring, first-place San Diego continued picking up the pace and nearly doubled its score in the 63rd minute, but the shot went just right of the goal.

In the 79th minute, Angel City’s Tyler Lussi received a red card from a foul during a San Diego scoring opportunity, leaving the home side to compete with 10 players the remainder of the match.

Saturday’s match was the first face-off between the California clubs in regular season. In the preseason Challenge Cup, the Wave (6-3-3) won one, and the second ended in a draw.

McNabb scored her first goal of the season early in the second half, with an assist from Katie Johnson. Ali Riley scored the first goal for Angel City.

“It was defensively not very good from us, so you can’t defend that and expect to get points,” Stoney said in a post-match press conference.

“I never fault the players effort they were, I did everything to try and get free points,” she added. “We didn’t take our chances, and we didn’t defend well in key moments. So that’s why we lost the game.”

However, the coach said she was proud of the club’s second-half effort and creating lots of scoring chances.

Will this be an intense SoCal rivalry?

“This is a new derby (rivalry), but we want to give it everything we’ve got to get a result — to make sure that we build history between these two teams,” Stoney said Thursday.

Goalkeeper Carly Telford said Thursday: “I think it will become even more huge. It’s only going to grow and grow… There’s always going to be the who’s doing it best, who’s got the best team.”

The Wave’s next match is against Racing Louisville at 7 p.m. Friday, July 15, at Torero Stadium at the University of San Diego.