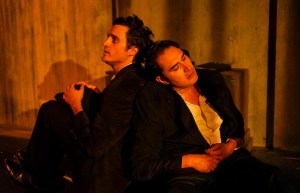 Jose Balistrieri (left) as Casagemas and Javier Guerrero as Picasso in “Blue Period” at OnStage Playhouse. Photo by Daren Scott

They were two young men, age 19 and 20, friends from childhood. Fellow artists, traveling from Barcelona to experience the delirious whirlwind of Paris at the turn of the 20th century. Together, they lived in a Montmartre garret, drinking copious amounts of wine and absinthe, frequenting bordellos, bars, cafes and opium dens. Overindulging in everything. Hobnobbing with prostitutes, painters, collectors and art dealers. High on life, drunk on love. Those few months in the City of Light would alter the course of their lives.

One of them, a genius, was destined for glory. The other… wasn’t.

Pablo Picasso, with his bravado, brash confidence and ebullience, seemed irresistible to everyone. His bestie, Carles Casagemas, with his volatility and morphine addiction, was on an emotional rollercoaster, destined for disaster.

Similarly, “Blue Period,” the new play by New York-born San Diegan Charles Borkhuis, having its world premiere at OnStage Playhouse (after two years of workshopping), is manic in the first act and depressive in the second. The title refers to the somber works produced by the Spanish painter in an extended bout of depression, between 1901 and 1904.

When Parisian model Germaine Gargallo poses for Picasso, she joins their carousing “club,” and they become an inseparable triumvirate.

Casagemas falls desperately, obsessively in love with her. But she’s already married, though she admits, somewhat anachronistically, that it’s an “open marriage.”

She wants to have fun; she wants to be a muse. She wants paintings of her to hang in homes of the rich, where she would never actually be invited, but where she could watch the residents age and never grow old herself. Also, it becomes evident, she wants Picasso (they were companions, then lovers and, though it isn’t intimated here, they ended up as lifelong friends).

There’s a wild, youthful exuberance to it all at first. Borkhuis’s rapid-fire dialogue crackles.

Picasso is on fire, his creativity inexhaustible. He’s taken on by noted art dealer Pere Manyac, who sees his brilliance but finds it underdeveloped.

As “Blue Period” tells it, the three disparate men have something besides art in common: they were all disappointments to their fathers.

At the end of 1900, the young men’s trip home to Barcelona for Christmas proves fatal to their friendship.

On his return to Paris, Picasso becomes a different person and artist. Grief-stricken, he vows to go his own way, refusing to be “Manyac’s lapdog.” He only paints the outcasts of society: the broken, lonely, homeless, starving, ill and disabled.

His “Blue Period” paintings were unsellable at the time, but became some of his most popular works. He would, of course, go on to create prolifically, even profligately, in many styles and mediums.

But in those at-first heady Paris days, it was all fun and drink and clowning, though Picasso’s closest friends and associates and models never really felt seen by him.

“You look right through me,” says Casagemas. “I’m starting to disappear.” As Germaine puts it, “You ignore everyone you’re not painting.”

Borhuis is trying to cover a lot of territory, and he mostly succeeds admirably, though the character of Manyac in under-drawn, perhaps because he’s the outsider in this quartet, not a member of the “club.” A bewigged Herbert Sigüenza gives him gravitas, but his character isn’t written as a compassionate or compelling figure — only a discerning one.

We don’t learn much about Germaine, either, but Claire Kaplan’s performance is so luminous, so seductive and teasing, life-loving and fiercely independent, that we fall for her just as the men do. She becomes the catalyst, the explainer, who gives insight into what seems to have been in the mind (and heart) of Casagemas. But her infectious joie de vivre devolves, in the manner of Casagemas, into a desperate, clingy obsession — with Picasso.

As is apt for this provocative story, it’s the relationship of the two young men that takes center stage — and Javier Guerrero (as Picasso) and Jose Balistrieri (Casagemas) are both commanding and superb.

For Picasso, it’s always about the work. He sees everyone as a potential subject. No emotional ties bind him — until he loses his best friend, and nearly loses himself. But he never stops working. Guerrero captures his passion, his relentless drive, his ruthless ambition.

Balistrieri, who is about to begin The Old Globe/USD MFA program, is a marvel.

His wide, black-rimmed eyes are searing, crazed; his mania is palpable. In the early Paris days, he is antic, funny, in constant motion, clearly intimidated by Picasso’s talent, and destroyed when his friend criticizes his own self-conscious attempts. He is consumed by Germaine, wanting her for his own, but agonized that he can’t perform for or with her. He’s a clown, a prestidigitator and a full-blown tragedy. It’s a masterful performance.

The three male cast members have worked together, expertly, before — in the 2018 New Village Arts production of José Rivera’s magical “Cloud Tectonics.” Balistrieri and Guerrero played brothers (a woman comes between them!), while Sigüenza made his directing debut.

Now, with dexterity and vitality, James P. Darvas directs these four consummate actors, keeping the first-act pace firecracker-fast and frenetic, slowing things to a downbeat mood in the second act. There’s only one weakness (aside from the shaky line-recall in the preview performance): the surprisingly poor French pronunciations throughout.

The production and design work matches the acting/directing acumen.

The set (Duane McGregor) captures the bohemian clutter and disheveled decadence of the flat, and the desolation of the cemetery the death-fixated Casagemas frequented. The lighting (Kevin “Blax” Burroughs) and costumes (Sandra Ruíz) contribute mightily to the feel of the place and time.

Most inventive are the projections (by Estefanía Ricalde, who also designed the sound, with video design by Salomón Maya), displayed on a framed canvas, strikingly conveying the vibrant scenery going by as the two friends head home to Spain by train. Then, we see a wonderful array of Picasso’s Blue Period paintings, in all their brooding, abstracted realism, ending with a moving flame (a ghostlight), that remains to the end.

Beautifully complementing these images is a lobby exhibition of Sigüenza’s own Blue Period paintings, including a youthful version of Picasso’s iconic “The Old Guitarist,” and a small, blue adaptation of the master’s magnum opus, “Guernica.”

This incendiary story begs to be told and re-told. In 2013, UC San Diego premiered a play by Sharif Abu Hamdeh, whose “Casagemas” was a unique fusion of theater and opera.