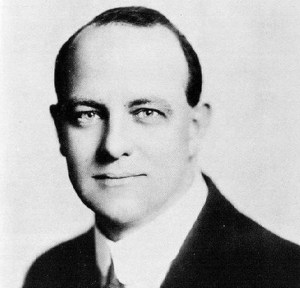 The Wodehouse Society, dedicated to the life and works of author/playwright/lyricist P. G. Wodehouse, is holding its next biennial convention on Oct. 20–23 in San Diego, at the U.S. Grant Hotel.

Wodehouse enthusiasts will gather to celebrate their literary hero with informative talks, Wodehouse-themed entertainment, and recreational activities such as a harbor cruise, cricket match, and costume contest. Registration and additional information can be found at www.wodehouse.org.

Pelham Grenville Wodehouse  ̶  nicknamed “Plum” by his family  ̶  was born in England on October 15, 1881, and began writing at an early age. His first novel, The Pothunters, was published in 1902.

He went on to produce more than 90 books, in addition to innumerable articles. song lyrics and stage and screenplays. His indelible characters include Bertie Wooster and Jeeves (portrayed by Hugh Laurie and Stephen Fry in the PBS series Jeeves and Wooster), as well as Lord Emsworth and his prized pig, Empress of Blandings.

Wodehouse moved to the U.S. in 1947, settling in Remsenburg, New York, and was still writing when he died in 1975, weeks after being knighted by Queen Elizabeth. He is famous for his elaborate plots and elegant word play, and described his writing as “a sort of musical comedy without music.”

In 2019 he posthumously received the ultimate honor for an English writer: a memorial stone near Poets’ Corner in Westminster Abbey.

Founded in 1980 by a small band of dedicated admirers of Wodehouse and his works, The Wodehouse Society has grown to the extent where it now boasts members from around the world, including the U.K., Europe, India, and Japan. In the U.S. and Canada, there are 20 regional chapters whose members meet regularly between conventions.

The society’s first convention was held in 1982 in Pennsylvania; subsequent gatherings have moved around the country every two years, and all have featured a delightful mix of talks, songs, games, and conviviality. The society also publishes a quarterly journal called Plum Lines.

The 2022 convention, entitled “Where in the World Is Pelham? San Diego!”, is the 21st international convention of The Wodehouse Society, and the first to be held in California since 2005’s “Hooray for Hollywood!” gathering.

With much merrymaking and many riveting talks on the agenda, this convention promises to be as full of fun and enlightenment as all TWS binges are. A highlight will be a musical performance of Wodehouse’s songs by renowned singer Maria Jette, who has recorded two albums of Wodehouse material.

We hope all who enjoy P. G. Wodehouse and his wonderful stories, characters, and songs will consider attending the San Diego convention, October 20–23, and joining The Wodehouse Society. Convention registration information, a complete list of local chapters, and other society information can be found at wodehouse.org; specific questions may be addressed to elliotttws@gmail.com.