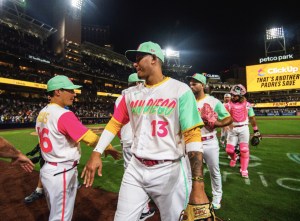 Manny Machado learned Friday that he will be an NL All-Star starter. His three-run homer in the first got the Padres off to a winning start at Petco as the team played for the first time in their speciality uniforms. Photo credit: @Padres via Twitter

And oh yeah, they won a baseball game, defeating the San Francisco Giants 6-3 at Petco Park.

Blake Snell gave the Padres six solid innings for his first win of the season. He struck out 11 and gave up one run as he improved to 1-5. Nick Martinez recorded the save despite a ninth-inning scare in which the Giants scored two on a Brandon Belt pinch-hit home run.

The Friars gave Snell an immediate lead, though, thanks to the man of the day, Machado, who hit a three-run homer in the bottom of the first. They added runs in the sixth and the eighth as well.

Hours earlier, Machado found out that fans narrowly voted him in as the National League’s starting third baseman for the July 19 All-Star Game at Dodger Stadium.

It will be his first start for the NL team – he had two others while with the Baltimore Orioles – and his sixth All-Star appearance.

“This one is my first as a starter with the San Diego Padres,” Machado told MLB.com. “On top of that, it was voted by the fans. It shows you how much San Diego has been enjoying us on the field and supporting us through this whole year.”

Meanwhile, the Padres placed Profar on the seven-day concussion list following his Thursday collision with teammate C.J. Abrams. Team officials said that in addition to the injury, suffered when he struck his head on Abrams’ knee, he has a neck strain.

Profar was released from the hospital overnight. He had been taken off the field on a stretcher, but appeared to be alert and even smiled as medics led him away.

Manager Bob Melvin told MLB.com Friday, given how badly things could have gone, that “we really caught a break.”

The Padres also stepped on the field for the first time in their “City Connect’ uniforms, part of a partnership with Nike. The unis, featuring pastel hues, have divided some fans, but the team is all in, embracing the tie to San Diego’s sun-and-surf lifestyle and its place along the border with Mexico.