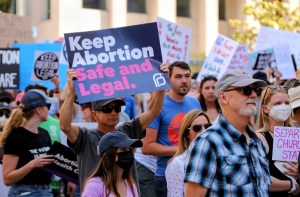 An abortion rights rally in San Diego in May. Photo by Salvatore Giametta

A new poll finds that 71% of registered California voters plan to vote for a state constitutional amendment protecting women’s right to abortion.

The poll released Wednesday by the Berkeley Institute for Government Studies found majorities of 89% of Democrats and 74% of independents plan to vote for Proposition 1, but only 35% of the state’s Republicans.

The proposition on the November ballot would prohibit the state from denying or interfering with a woman’s right to an abortion and guarantees access to contraceptives.

The proposition was advanced by the state Legislature in the aftermath of the U.S. Supreme Court’s ruling overturning the 49-year-old Roe v. Wade decision and granting individual states the right to limit or ban abortion. The Berkeley poll found 68% of California voters disapproved the the high court’s action.

While the ruling only affected abortion, 66% of the poll respondents expressed concerns that the court could invalidate past rulings protecting contraceptive rights and same-sex marriage.

Cristina Mora, co-director of the UC Berkeley institute, said the poll’s findings “show that the majority of California voters disagree with the Supreme Court’s recent ruling and approve of measures that would help to safeguard women’s rights in the state.”

The poll comes in the wake of an election in conservative Kansas that overwhelmingly supported abortion rights and the upset victory of a Democratic congressional candidate in New York who campaigned against the Republican Party’s anti-abortion stance.

The poll was administered online in English and Spanish Aug. 9-15 among 9,254 California registered voters.