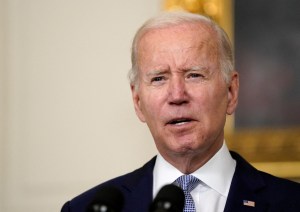 President Joe Biden on Friday nominated a California Superior Court judge to the federal bench, and if he’s confirmed, the feat would mark a milestone for the state’s LGBTQ community.

Three of the president’s eight nominees would hold spots on California U.S. District Courts if the Senate approves their nominations. Two serve as Superior Court judges in Northern California, including Daniel Calabretta, who could become the first openly gay federal judge in the state’s Eastern District.

Calabretta, a judge in Sacramento, also has served as Deputy Legal Affairs Secretary for former Gov. Jerry Brown and once clerked for the late Supreme Court Justice John Paul Stevens.

The other two California nominees are:

Most prominent among them is Julie Rikelman, an abortion rights lawyer with the Center for Reproductive Rights whom the president picked to serve on the Boston-based 1st U.S. Circuit Court of Appeals.

She represented the Mississippi clinic at the heart of the June Supreme Court decision to overturn the landmark 1973 Roe v. Wade abortion rights decision.

“Julie Rikelman brings exactly the kind of experience with reproductive rights we desperately need on the courts,” Christopher Kang, chief counsel of the progressive group Demand Justice, said in a statement.

Conservative opposition is expected in the U.S. Senate, where Democrats are facing pressure from progressive activists to speed up judicial confirmations before the Nov. 8 midterm elections, when they risk losing control of the chamber to Republicans.

“This nominee is a radical, left-wing abortion activist who has no business being on any court, let alone a federal appellate court,” said Mike Davis, who heads the conservative judicial advocacy group the Article III Project.

Other district court nominees include Myong Joun, a state court judge in Boston, picked to become the first Asian American man on the federal bench in Massachusetts, where Biden also nominated Julia Kobick, a deputy state solicitor in the state attorney general’s office.

District of Columbia Superior Court Judge Todd Edelman was nominated to be a federal judge in Washington, and U.S. Bankruptcy Judge Jeffery Hopkins would, if confirmed, become a district court judge in Southern Ohio.