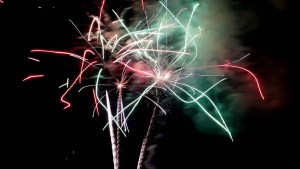 La Mesans and nearby locals declared independence from having to travel to distant Fourth of July celebrations Monday. And no fighting Big Bay Boom traffic either.

The all-day music fest returned to Lake Murray along with the fireworks shot over the San Diego reservoir, having been halted in the pandemic years 2020 and 2021.

The kid-friendly festival was at Lake Murray Community Park in San Carlos, but the sky show attracted adjoining communities from La Mesa to Del Cerro.

“This event has been sorely missed by our community and the hype of its return is swelling,” said its Facebook page, which thanked several dozen sponsors (and hailed volunteers).

The event was rescued in 2017 after several years hiatus with the formation of the Lake Murray Fireworks and Events 501(c)(3) nonprofit corporation.

Melissa DeMarco, this year’s president of the group, called the day — which raised about $100,000 from community donations and small businesses — a “huge success.”

4th of July at Lake Murray was a blast! Shout-out to Pop Vinyl for the excellent vocals & to Lake Murray Fireworks for putting on a great show. #4THJULY #SanDiego #lakemurray pic.twitter.com/mIO2ySWjBo

One of the best parts of the #4thofJuly is communities coming together. That was certainly the case at the Lake Murray Fireworks and Music Fest! Thank you to all the volunteers for making this event happen and for taking part! #ForAllofUs pic.twitter.com/EhkP9ZarOm