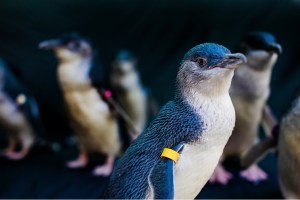 Elected leaders and representatives from the Birch Aquarium at Scripps Institution of Oceanography at UC San Diego cut the ribbon Tuesday on a new exhibit featuring the world’s smallest penguins, with access to the general public beginning Wednesday.

The Beyster Family Little Blue Penguins exhibit is a 2,900-square-foot habitat that allows people to come face-to-face with the adorable animals as they “waddle, swim and glide about their new home,” according to the aquarium.

“Little blue penguins and other seabirds, are sentinel species for our ocean’s health and help us understand how we can be better stewards for our planet,” said Jenn Nero Moffatt, senior director of Animal Care, Science and Conservation at UCSD. “We hope that one look at their awkward waddling, their pint-sized bodies, torpedo swimming and social nature will leave our guests enchanted, and wanting to learn how to aid in conservation efforts.”

The penguins measure under a foot tall, weigh between 2 and 3 pounds when full-grown and are known for their slate-blue plumage, giving them their common name.

“The new facility will allow us to contribute to an international Species Survival Plan and create an interesting new guest experience,” said Harry Helling, executive director of the Birch Aquarium. “Little blue penguins will be wonderful ambassadors that can help us to engage our community more deeply and further our mission to connect understanding to protecting our ocean planet.”

The exhibit is named in honor of a $1 million gift from the Beyster Family, who are long-time supporters of Scripps Institution of Oceanography and Birch Aquarium.

“Their graceful swimming and diving abilities and awkwardness on land have endeared these little Southern Australian marine animal ambassadors to the Beyster Family,” James Beyster said. “We are proud to support Birch Aquarium’s mission to shed light on the survival challenges that little blue penguins face along with other seabird species.”

The exhibit also includes a small amphitheater for guests to observe birds swimming, and a “discovery cave” for children to closely observe the penguins on land and inside nesting burrows. It is the only exhibit to feature little blues on the West Coast of the United States.

“This is the largest addition since the Birch opened, a cute and momentous occasion,” said San Diego Mayor Todd Gloria, who helped cut the ribbon. “This will be an entry point to understand these animals are experiencing the effects of climate change.”

National City Mayor Alejandra Sotelo-Solis and Assemblywoman Tasha Boerner Horvath were also on hand to cut the ribbon, along with Nero Moffatt and Helling.

Around 16 birds will call the aquarium in La Jolla home, including six on loan from the Dallas World Aquarium and 10 more straight from Australia.