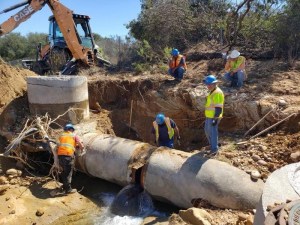 City crews work on the broken pipeline. Photo courtesy of the city

The city of San Diego Monday issued a boil water order for around 600 residents of the Tierrasanta neighborhood due to low water pressure issues.

All affected customers will receive more detailed information at their homes. The affected area is largely around those streets adjacent to Mission Trails Regional Park.

The boil water notice was issued as a precaution in coordination with the California Division of Drinking Water following a water transmission line breaking Saturday morning near the 5400 block of Governor Drive. It has not been determined if the water is contaminated.

Also due to low pressure issues, customers in the communities highlighted on this map are asked to reduce water usage to only critical needs, like cooking & drinking. Non-critical uses, like irrigating landscaping & laundry, should be postponed until water pressure is restored. pic.twitter.com/yikSSvFcvy

The city has water wagons available at the 5100 block of Corte Playa Catalina and 4800 block of Seda Drive for residents to access water for drinking, cooking and other needs.

Due to low pressure issues, customers in several communities in the central part of the city, including Bay Park, Clairemont, Kearny Mesa, Linda Vista and Tierrasanta, are asked to reduce their water usage to only critical needs, such as cooking and drinking, a statement from the city reads. Non- critical uses, such as irrigating landscaping and washing clothes, should be postponed until water pressure is restored.

Low water pressure issues stem from the transmission pipeline being taken out of service. City Public Utilities Department crews are working on repairs to the broken water pipe. It is expected that water service will be restored to those impacted by the boil water notice by the end of the week.