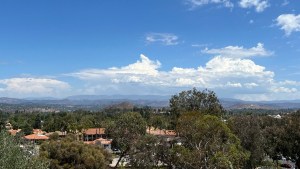 Building high pressure aloft will decrease the shower activity Tuesday and Wednesday, but a return of monsoonal flow is expected for the remainder of the week.

245 PM Radar Update: Areas of heavy rain causing areas of flash flooding will continue into this evening. The most active areas are the High Desert and San Bernardino mtns. Never cross a flooded roadway! Turn around, don't drown! #CAwx pic.twitter.com/vldLQkX3WG

A shallow marine layer along the coast, coupled with higher humidity over the Southwest much of the week, will keep daytime temperatures near, or below average, while overnight lows remain elevated.