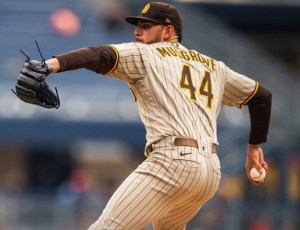 Joe Musgrove during a 5-2 win over the Pirates on May 1. Photo credit: @Padres, via Twitter

The Padres had one of those days Sunday, suffering a 12-0 shellacking at the hands of the San Francisco Giants as they settled for a split of the four-game series.

The Giants hit MacKenzie Gore hard. The rookie starter gave up eight runs in three-plus innings of work, including two-run home runs to Thairo Estrada and Wilmer Flores. Flores added a second homer in the ninth as part of the Giants’ 17-hit attack.

The Padres offered nary a murmur of protest, though they did manage to load the bases in the bottom of the ninth. Austin Nola and Eric Hosmer singled, while Jake Cronenworth walked in-between.

But José Azocar and Brent Rooker both struck out swinging to bring the day to a merciful close.

Of Gore, manager Bob Melvin said simply, “they were on his fastball today.”

Here’s one @MLB All-Star game tradition @Padres Joe Musgrove will gladly miss out on this year. @itsFatherJoe44 is finally an All-Star. pic.twitter.com/2uYXy6H06j

Musgrove, an East County native, has gone 8-2 this season with a 2.09 ERA to earn his first spot on an All-Star team.

“From Opening Day to this point, he’s been one of the studs in the National League. Very deserved,” Melvin said of Musgrove’s honor.

With a week to go before the All-Star break, the Padres – suddenly eight games behind the hot Dodgers – head out on the road for four games in Colorado, followed by three in Arizona. Sean Manaea gets the start Monday.