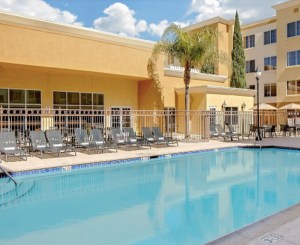 A proposed settlement was announced Thursday between the city of San Diego and a real estate broker the city accused of improperly profiting from a hotel sale.

The city accused Jim Neil of buying thousands of shares in Chatham Lodging Trust, the former owner of a Mission Valley hotel, just before he recommended that the San Diego Housing Commission make the purchase.

The San Diego City Attorney’s Office sued Neil and real estate firm Kidder Mathews, alleging that they violated conflict-of-interest disclosure laws that governed their roles in the commission’s purchase of two Residence Inn hotels, the one in Mission Valley and another in Kearny Mesa.

The city planned to use the sites to shelter homeless people during the COVID-19 pandemic.

According to the city’s 2021 lawsuit, Neil bought 40,000 shares of stock in the trust before negotiating a $67-million deal for the commission to purchase the 192-unit property.

The City Attorney’s Office alleges Neil earned commissions on both hotel deals that exceeded the $250,000 limit initially set forth in the terms of his deal.

In a statement, Neil’s legal team said his agreement to the settlement was not an admission of wrongdoing, but rather a means to “move forward without further years of costly litigation.”

His attorneys say he informed the Housing Commission that he intended to buy the stock before the transaction took place and was told by the agency’s senior staff that it would not be an issue.

His attorneys also argue that contrary to the City Attorney’s claims, the contract between the city and Kidder Mathews laid out that his commissions could exceed $250,000 if approved by the commission.

Neil’s team says the commission voted to do so for both the Mission Valley and Kearny Mesa transactions.

Per the settlement agreement, which still must be approved by the Housing Commission, Housing Authority and City Council, Neil and Kidder Mathews will pay $1 million in damages, $845,000 of which will go to the San Diego Housing Commission, and $155,000 to the city.

Neil will also stipulate to a permanent disbarment from conducting business with the city or city-affiliated entities, while Kidder Mathews has agreed to a two-year disbarment.

“The city will continue to be a target for corrupt business practices if those who take advantage of it are not held accountable,” San Diego City Attorney Mara W. Elliott said in a statement.

Neil’s attorneys called the city’s litigation “unwarranted” and said their client maintains that his efforts and those of the Housing Commission staff “were in good faith and well intentioned.”