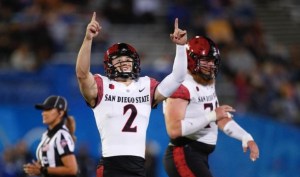 ESPN reported that Araiza released a statement during the game in which he said: “The facts of the incident are not what they are portrayed in the lawsuit or in the press. I look forward to quickly setting the record straight.”

Araiza was not seen on the sideline to start the game.

“He is currently the only punter on the Bills’ roster,” said the NFL report. “Buffalo backup quarterback Matt Barkley punted for the team on Friday.”

The game was delayed a half-hour due to lightning, and the Panthers were leading the Bills 14-0 at halftime.

In a statement Thursday, the Bills said: “We were recently made aware of a civil complaint involving Matt from October 2021. Due to the serious nature of the complaint, we conducted a thorough examination of this matter. As this is an ongoing civil case, we will have no other comment at this point.”

Rapoport said the NFL’s Personnel Conduct Policy does not apply to incidents that take place before a player was drafted or joined a team.

“If criminal charges are filed against Araiza, however, he would then be subject to a league investigation and potential disciplinary action, per the league policy,” he wrote.

Kerry Armstrong, Araiza’s attorney, has denied the rape accusation, according to the Los Angeles Times.