California Gets Reprieve on Colorado River Water, But Arizona and Nevada Face Cutbacks 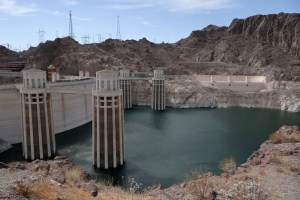 Low water levels due to drought are seen at Hoover Dam near Las Vegas. REUTERS/Bridget Bennett

The U.S. Bureau of Reclamation in June had given the states 60 days, until mid-August, to negotiate their own reductions or possibly face mandatory cutbacks. Federal officials asked for a reduced usage of 2 million to 4 million acre-feet of water per year, an unprecedented reduction of 15% to 30% in the coming year.

But bureau and Department of Interior officials told a news conference they would give the states more time to reach a deal affecting the water supply of 40 million people.

They instead fell back on previously negotiated cuts that for the second year in a row will impose reductions on Nevada, Arizona and Mexico, which also receives a Colorado River allotment.

“That said, we stand firm in the need to protect the system,” Beaudreau said, adding he was encouraged by the talks so far and by new federal money for water management.

A 24-month forecast released on Tuesday showed falling levels of the two largest reservoirs on the river, Lake Mead and Lake Powell, will trigger the previously negotiated cuts.

Arizona, Nevada and Mexico will have supplies reduced for a second straight year: 21% for Arizona, 8% for Nevada and 7% for Mexico.

They are the first to be subject to cutbacks under the Colorado River compact. Last year, they got hit with 18%, 7% and 5% reductions, respectively, for the first time ever.

Sandra L. Kerl, general manager of the San Diego County Water Authority, said future cutbacks could effect the amount of Colorado River water that is transferred from the Imperial Irrigation District. But she said other water sources and storage facilities will continue to shield San Diego from the “worst effects” of the drought.

“Today’s announcement by the Bureau of Reclamation is a reminder of just how important it is to increase water conservation across San Diego County and the rest of the arid West,” she said. “An increasingly hot and dry climate is creating unprecedented challenges for water supplies that will impact life in the Southwest for the foreseeable future.”

Negotiations over further reductions is creating tension among the states, especially as California, the largest user, has so far avoided cuts triggered by low reservoir levels.

Lake Mead and Lake Powell are barely above one-quarter of their capacity. If they fall much lower, they will be unable to generate hydroelectric power for millions in the West.

“It is unacceptable for Arizona to continue to carry a disproportionate burden of reductions for the benefit of others who have not contributed,” Ted Cooke, general manager of the Central Arizona Project, said in a statement.

John Entsminger, general manager of the Southern Nevada Water Authority, said he had hoped for more urgency from the bureau on Tuesday.

“It is possible for us to make the larger necessary cuts, but I think it is going to take everyone at the table realizing that everyone needs to suffer a commensurate level of pain to get there,” Entsminger said.

The 23-year megadrought, the worst on record in at least 1,200 years, is testing the strength of the compact, which a century ago assumed the river could provide 20 million acre-feet of water each year. The river’s actual flow the past two decades has averaged 12.5 million acre-feet, leaving state water managers with more rights on paper than water that exists in the river.

“As we have emphasized since taking office, the circumstances we face will require swift action and increased water conservation in every state, from every sector,” said Tanya Trujillo, the Interior Department’s assistant secretary for water and science.