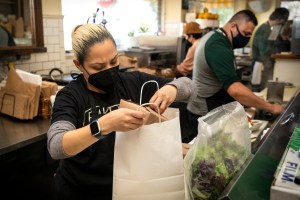 California’s top state court has agreed to decide whether employers can be held liable under state law when their workers contract COVID-19 on the job and spread it to their relatives.

The California Supreme Court on Wednesday granted a request by the 9th U.S. Circuit Court of Appeals to take up a case brought by Corby Kuciemba, who says she became seriously ill with COVID-19 after her husband was exposed to the virus at his job with Victory Woodworks in San Francisco.

Kuciemba in a 2020 lawsuit accused Victory of negligence and creating a “public nuisance” by failing to adopt safety policies to stop the spread of COVID. She is appealing a ruling by a federal judge in San Francisco that said her claims were covered by workers’ compensation and she could not sue Victory in court.

Business groups have said allowing employers to be held liable for so-called “take-home” COVID infections will prompt lawsuits not only by workers’ family and friends but by anyone infected by that circle of people.

Lawyers for Kucimeba and Victory Woodworks did not immediately respond to requests for comment.

In April, the 9th Circuit asked the California Supreme Court to take the case, saying the state court should decide whether state workers’ compensation law covers the COVID infections of workers’ relatives and whether employers have a general legal duty to prevent the spread of COVID.

Federal appeals courts can ask state courts to answer novel questions that arise under state laws. The California Supreme Court will decide the legal issues, leaving the 9th Circuit to apply its ruling to Kuciemba’s case.

Earlier in April, the California Supreme Court declined to review a state appeals court’s ruling that said a See’s Candies Inc employee whose husband died after she transmitted COVID-19 to him could sue the company. It was the first ruling of its kind.