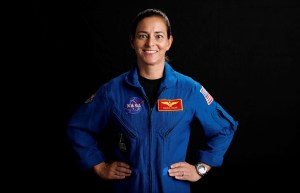 Nicole Aunapu Mann has waited nine long years for her chance to go into space.

And if all goes according to plan, that wait will end on Oct. 3, when she will lead NASA’s Crew-5 mission to the International Space Station on a SpaceX rocket.

“It has been a long journey, but it’s been so well worth it,” Mann told Reuters.

“I feel very proud,” said Mann. “It’s important that we celebrate our diversity and really communicate that specifically to the younger generation.”

Mann, a member of the Wailacki of the Round Valley Indian Tribes in Northern California, says that her upcoming mission has sparked excitement in her community.

“That’s really, I think, an audience that we don’t get an opportunity to reach out to very often,” she said.

With her journey into space just weeks away, Mann says she will be taking a few mementos into orbit to remind her of home, among them a “dreamcatcher,” a traditional Native American protective charm.

Mann, a marine colonel with a master’s degree in mechanical engineering, was recruited into NASA in 2013 and finished candidate training two years later.

They are set to launch from Florida’s Kennedy Space Center aboard SpaceX’s Dragon spacecraft and swap out Crew-4 from the ISS.

The Crew-5 mission will follow the beginning of NASA’s landmark Artemis 1 mission, set for its debut launch on Monday.

The gigantic Space Launch System, topped by an unmanned Orion Crew Capsule, is the first step in the goal of returning humans to the Moon after a half-century hiatus.

Mann said that she and her ISS crew will be helping to prepare for the future success of Artemis.

“What we’re doing in low earth orbit not only trains the astronauts but provides the technical development and operational concepts that we’re going to need to live (with a) sustained human presence on the moon and eventually take us to Mars,” she said.

“So I just hope that the whole world is watching on Monday.”