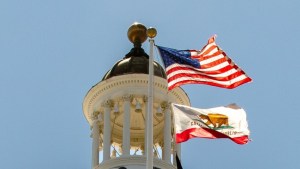 Flags over the California Capitol in Sacramento. Courtesy of Sen. Toni Atkins’ office

California legislative leaders announced a plan to refund taxpayers up to $1,050 for inflation relief in a $17 billion budget deal worked out over the weekend.

The plan that “prioritizes getting dollars back into the pockets of millions of Californians who are grappling with global inflation” was announced by Gov. Gavin Newsom, Senate President pro Tempore Toni Atkins and Assembly Speaker Anthony Rendon.

“The centerpiece of the agreement, a $17 billion inflation-relief package, will offer tax refunds to millions of working Californians,” the three political leaders state in a joint statement on Sunday. “Twenty-three million Californians will benefit from direct payments of up to $1,050.”

The amount of the refund will depend on taxpayers’ income and filing status, varying from $350 for single filers with incomes up to $75,000, to $1,050 for joint filers with at least one dependent and incomes up to $150,000. The rebates will be less for filers with higher incomes.

This budget agreement will bring relief to taxpayers in a significant and equitable way, putting our state’s wealth to work for Californians. I appreciate the partnership of @CAGovernor Newsom, Speaker @Rendon63rd, and the budget chairs from both houses. https://t.co/gon7jq4m2L

The package also includes suspension of the state sales tax on diesel fuel, and additional funds to help people pay their rent and utility bills. However, the state’s gas tax remains in effect despite Republican pleas to suspend it.

The tax rebate plan replaces an earlier proposal by Newsom to send $400 debit cards to every vehicle owner in the state. Legislative leaders resisted that approach, which did not include an income limit.

The rebate agreement paves the way for a record $300 billion budget to take effect on July 1.

“In the face of growing economic uncertainty, this budget invests in California’s values while further filling the state’s budget reserves and building in triggers for future state spending to ensure budget stability for years to come,” the three leaders said.