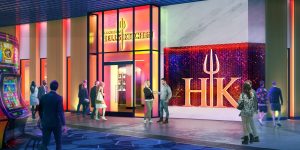 Get out the pitchforks and maybe some yelling.

The concept will officially open its doors for service on Friday, Aug. 12 at 4 p.m.

This “HELL’S KITCHEN” is the largest location to date and will accommodate up to 332 guests. The restaurant’s design and menu, emblazoned with the iconic red and blue flames, is a direct reflection of the FOX culinary competition series of the same name.

An elegant bar, full-service restaurant, exhibition kitchen, plush lounge, curated wine wall, two private dining rooms (with the ability to be combined into one larger space) and two chef’s tables will be highlights of the dining experience.

“We are thrilled to welcome guests near and far to have the legendary Gordon Ramsay ‘HELL’S KITCHEN’ experience,” said Chairman Bo Mazzetti of the Rincon Tribe. “It has been an honor to work side-by-side with Chef Ramsay and his team to bring this restaurant to life, and we are grateful to finally share this exceptional, one-of-a-kind culinary adventure with you all.”

The restaurant will also offer vegetarian and vegan options on a separate menu, including Truffle Risotto, Quinoa Salad, Wild Mushrooms, and Glazed Root Vegetables. The beverage program ranges from house-made cocktails (Notes from Gordon, The Pitchfork, Fear and Loathing, and Meet Your Maker, to name just a few) to an extensive list of locally and internationally sourced beers, wines, and other spirits. Diners can expect to see new and progressive dishes specific to the California Gordon Ramsay “HELL’S KITCHEN” location in the coming months, solidifying the restaurant at the forefront of culinary trends, and ensuring every meal provides a hint of surprise.

“Guests can expect a high-touch and exhilarating dining experience when they visit Gordon Ramsay’ HELL’S KITCHEN’ at Harrah’s Resort SoCal,” said restaurant General Manager Sarah Ertmann. “Whether you’re a devout epicurean, a wine enthusiast, or simply a fan of the renowned show, this restaurant will offer something for everyone.”

Gordon Ramsay’s “HELL’S KITCHEN” will be open seven days a week for dinner service from 4 p.m. to 11 p.m. Friday–Saturday and 4 p.m. to 10 p.m. Sunday–Thursday.

Reservations are now live for booking on OpenTable, viewable here.