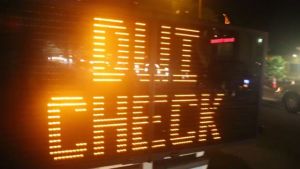 The Chula Vista Police Department announced plans for a DUI and license checkpoint somewhere in the city limits on Friday night.

Officers will be stopping drivers from 6 p.m. to midnight to check for alcohol or marijuana impairment as well as proper licensing.

“Impaired drivers put others on the road at significant risk,” Officer Oscar Miranda said. “Any prevention measures that reduce the number of impaired drivers on our roads significantly improves traffic safety.”

The department said the checkpoint location would be determined based previous DUI crashes.

Drivers charged with a first-time DUI face an average of $13,500 in fines and penalties, as well as a suspended license.