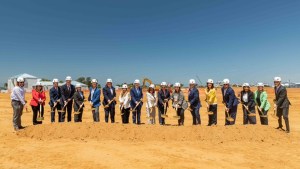 Chula Vista took the next step toward its ambitious Bayfront plans, as city and Port of San Diego leaders Wednesday broke ground on the Gaylord Pacific Resort and Convention Center — the centerpiece of the development.

This will be Gaylord Hotels’ first West Coast location. City and port leaders hope the convention center will spur other development on the 535-acre Chula Vista Bayfront.

It’s not every day you get to break ground on a $1.3B waterfront hotel and convention center. Congrats and thank you to everyone who helped make possible what so many said was impossible! @thinkchulavista @portofsandiego @GaylordHotels @MayorMarySalas #chulavistabayfront pic.twitter.com/IzLnM690GT

“The Chula Vista Bayfront is the defining project of a generation for the South Bay. We are finally realizing the fulfillment of all the tireless effort that hundreds if not thousands of people have invested in this project over the past few decades,” said Chula Vista Mayor Mary Casillas Salas.

“I am beyond proud and honored to be here to celebrate the start of construction on the Gaylord Pacific Resort and Convention Center.”

Heavy equipment is positioned on site for construction of the 1,600-room hotel and convention center. The ceremonial groundbreaking Wednesday was attended by representatives of Gaylord Hotels and the developer, RIDA Chula Vista, and hundreds of community supporters of the project.

“This is a historic day to kick off construction of the Gaylord Pacific Resort and Convention Center on the Chula Vista Bayfront,” said California Coastal Commissioner and City Councilman Steve Padilla.

“The people of the State of California, our San Diego region and the City of Chula Vista can look forward to a transformative project that provides major economic investment, job creation and many other public benefits.”

The total estimated cost to construct the 1,600-room hotel, parking improvements and convention center and associated improvements is $1.35 billion. The port and the city secured $275 million in public bond funding to support the public investment in the project and closed escrow in May. The first phase will include the resort hotel and convention center along with a public park, roads, a parking structure and supporting public infrastructure.

“The Chula Vista Bayfront is a model of excellent planning that balances economic development with public benefits including new parks and access to the coast, along with thousands of jobs,” said Port of San Diego Commissioner Ann Moore, who was appointed to serve on the seven-member board by the Chula Vista City Council. “The Gaylord Pacific Resort and Convention Center will be a point of pride for our entire region.”

Gaylord Pacific’s plans include a convention center with four ballrooms, three levels of meeting space and two outdoor meeting and event lawns as well as multiple restaurants, a sports bar, resort-style pool and an array of recreational facilities. To ensure connectivity to the wider bayfront, the project will also have public amenities including pedestrian promenades, bicycle access and more.

“Not only will this be the port’s first hotel in the city of Chula Vista, it will be the South Bay’s first convention center,” said Port of San Diego Chairman Dan Malcolm. “This is the largest public-private partnership ever undertaken by the port, and its effects will be nothing short of transformative — drawing visitors from throughout the State of California and beyond.”

The project is anticipated to create 3,580 jobs during construction. Once open, it is expected to have an economic impact of half-a-billion dollars each year and produce 4,000 permanent jobs.

The hotel is currently projected to open in 2025.