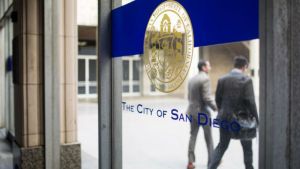 The San Diego City Council unanimously passed a surveillance ordinance Monday intended to put greater rules around the city’s acquisition and use of technology capable of monitoring the public.

The ordinance — more than two years in the making — doesn’t ban the city and law enforcement from surveillance technologies, but instead requires that the technologies used by city employees are public knowledge and can be evaluated with a privacy advisory board created this year. Monday’s action represents the first reading of the ordinance. The council will meet again for a second vote before it becomes final.

A controversial amendment to the ordinance approved by the council 5-4 on June 20 drew the ire of the public and several councilmembers.

Councilman Raul Campillo proposed to exempt San Diego police officers from the surveillance law if they are working on a federal task force. The amendment also capped attorney fees at $15,000 in the event a member of the public sues for a violation of the ordinance and wins.

In what was perhaps an attempt to find middle ground between the two sides of the council, City Council President Sean Elo-Rivera added an addendum to Monday’s vote calling for city staff to come back with recommendations on how to amend the ordinance to end the exemption for local police when the subject impacted reproductive health, including abortions, as well as citizenship status, gender identity, religious affiliation and other sensitive information for marginalized groups.

More than 50 in-person and virtual speakers tasked the City Council with keeping San Diego safe while balancing civil rights and privacy, the vast majority of which urged the body to dismiss the amendments approved in June and close any loophole for law enforcement.

Council President pro tem Monica Montgomery Steppe grew frustrated with what she saw as people falsely mischaracterizing those calling in with concerns about their privacy and how it could potentially be weaponized.

“Everyone wants the same doggone thing, and that is to feel safe in their community,” she said, wondering why the FBI had not reached out to her and the Transparent and Responsible Use of Surveillance Technology SD group to offer input in the more than two years it took to bring this law to the full council. “This is not the first time I’ve been disrespected by law enforcement on this dais.”

The impetus of the increased interest in privacy and civil liberties is tied to the City Council’s 2016 $30.3 million decision to upgrade city infrastructure with several thousand “smart streetlights” from General Electric. The streetlights were equipped with sensors to help extract numbers on traffic, pedestrian flow and environmental data. However, concerns quickly arose from residents and civil liberties groups on the oversight and use of video footage that could be recorded on the lights.

The San Diego Police Department used footage hundreds of times in attempts to solve serious crimes, including more than 30 times in investigating homicides before the program was shuttered in late 2020 by then-Mayor Kevin Faulconer. However, oversight of how the police department could use the footage was minimal. During protests over police practices and the treatment of Black Americans in the wake of the Memorial Day death of George Floyd in Minneapolis, the SDPD used the smart streetlights nearly 40 times in just five days to investigate protesters for incidents of vandalism and looting.

“Police have used streetlight recordings to help solve nearly 250 crimes, including murders, sexual assaults, kidnappings, carjackings, arsons and hate crimes,” Elliott said at the time. “Yet now a small group is telling a bunch of lies about smart streetlights to try to shut them down.”

The use of footage and data were proposed initially to help create traffic solutions. The SDPD began requesting the footage in 2018 to help in criminal investigations.

San Diego Police Chief David Nisleit told the council in June that if the amendment granting exceptions to SDPD was not passed, he would pull officers from federal task forces due to concerns they might jeopardize larger operations or disclose classified information.

A SDPD Captain said that since the smart streetlights program was shuttered, cellular data from the cameras and microphones was shut off. However, they continue to record and law enforcement contacts other city departments to manually take out the surveillance devices and download the data.

As a response to growing concerns about privacy protections, the Privacy Advisory Board was formed earlier this year to provide advice and technical assistance to the city on best practices to protect citizen privacy rights in connection with the purchase and use of surveillance equipment and other technology that collects or stores citizen data.