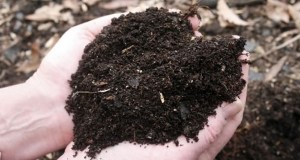 Seventh in a series republished with permission from the San Diego County Water Authority‘s website.

When undertaking a water-saving landscape renovation, strive to continuously feed as much organic matter as possible to the landscape soil to keep it healthy. Start with compost and mulch to jump-start the process. Eventually, your plants will feed themselves with their own leaf litter.

Organic matter feeds microbes living in the soil that make soil fluffy. It’s similar to bread rising because of yeast.

Compost and Mulch: What’s the Difference?

Compost is a soil amendment. It looks like soil and it’s hard to tell what it once was. That is because it is food scraps, landscape debris and/or manure from livestock, or biosolids (human manure) and other organic matter that already has been partially consumed and mostly decomposed by micro-organisms. Good compost brings oxygen, water, and life in one package.

Compost can be store-bought or made at home. The compost-making process, or composting, involves creating optimal conditions for the microbes to do their transformative work. When compost looks like soil, it can be worked directly into the soil. The more coarse or visible the bits of the compost are, the more likely it is to be used as mulch on top of the soil rather than as an incorporated amendment.

The microbes in healthy, biologically diverse mulch bind the organic matter together, forming a thick blanket. This cover protects soil and plant roots from temperature change, keeps moisture in by slowing evaporation from the surface of the soil, and keeps weeds from sprouting by reducing sunlight penetration to the soil surface.

Mulch always stays on top of the soil. Unlike compost, it is never worked in. Recycled organic debris is the most effective type of mulch because it builds soil structure over time and provides a durable, protective surface barrier. The smaller the debris and the more mixed leaves with wood chips, the faster it decomposes. When building soil, small and mixed is best.

Composted material, especially coarse composts, also can be used as mulch. Artificial and inorganic mulches (decomposed granite, gravel, rubber chips, and other rubble) are primarily decorative since they do not contribute to soil life or plant health. They may be used in limited applications such as pathways.