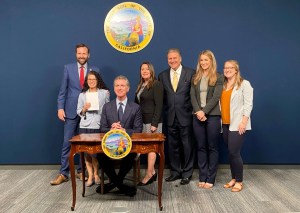 Senate Bill 54 requires a all single-use products made from a wide variety of plastics to be recyclable or compostable within 10 years. The law effects packaging and plastic food products like disposable cups, bowls and cutlery. Producers will be responsible for organizing an industry-wide compliance effort.

“For far too long, plastic waste has been a growing burden for humans, animals, and the water, soil, and air we need to exist,” said the bill’s author, Sen. Ben Allen, who represents coastal Los Angeles.

“We knew that we needed to act,” he said. “And in this time of extreme polarization in our nation, California was able to show that we can pass strong environmental legislation with bipartisan support that brought together the environmental and business communities.”

Californians Against Waste, which backed a November ballot measure to reduce single-use plastics, withdrew it just ahead of the Thursday election deadline, following intense negotiations with lawmakers.

Initially introduced in December 2018, the bill is the result of four years of discussions. It ultimately drew support from numerous environmental groups and business associations.

“Based on the most recent amendments and the author’s commitment to continue to work on the one outstanding issue raised by environmental justice groups around definitions, we are happy to express our support today,” said Nicole Kurian of Californians Against Waste.

SB 54 gives the plastics industry more time to comply with recycling mandates and regulations than the ballot measure — until 2032 instead of 2030. In California, only a small portion of all plastic waste is currently recycled. About 85% ends up in landfills.

After the bill’s passage in the Legislature, the influential Plastics Industry Association said it could not support SB 54, though it said that the bill “presents opportunities to continue to work to solve the recycling issues in the state of California in a way that a ballot initiative would not.”

CalMatters contributed to this article.