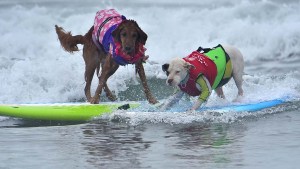 The trend of cooler weather with early morning low clouds and fog in San Diego County was expected to continue through Wednesday, the National Weather Service said.

High temperatures were projected to be a few degrees below seasonal norms each day through Wednesday along the coast, while the inland valleys, mountains and deserts will experience daytime highs anywhere from 6 to 12 degrees below normal for early July.

High temperatures on Monday were predicted to reach 70 to 75 along the coast, around 76 in the western valleys, 78 to 83 near the foothills, 77 to 87 in the mountains and 100 to 105 in the deserts, according to the weather agency.

Once the marine layer scatters out this morning, it'll be a lovely and clear day for all, a few degrees below seasonal normals!

Cloud bases should remain high enough to not block any firework displays this evening.

Clouds are expected along the coast on Monday night, but the weather service said they should be high enough so fireworks aren’t obscured.

Slow warming could begin around the middle of the week, and was predicted to continue into the weekend, the NWS said. The warming could be most noticeable inland. By Thursday, daytime temperatures were expected to be above normal, and minimum relative humidity was forecast to be lower well inland again.