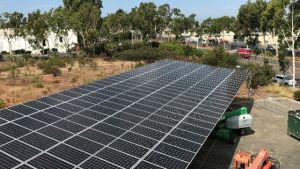 Solar panels at a City of San Diego facility. Courtesy of the city

Speaking with local journalists at a briefing, Elo-Rivera said his interest is in “actually taking action” to reach net-zero emissions.

On June 30, the council’s Environment Committee unanimously advanced Mayor Todd Gloria’s climate-action plan to full council. The plan sets a goal of 100% renewable energy by 2030 and net-zero emissions by 2035.

The transition away from fossil fuels would be supported by a number of strategic initiatives, including building electrification, electric-vehicle infrastructure, renewable energy, mobility upgrades, and zero waste goals.

Elo-Rivera praised Councilman Joe LaCava’s committee for making “a pretty good plan even better” since the end of last year.

“The plan that’s proposed is a very solid one,” said Elo-Rivera, but he stressed the importance of implementation with planning, funding and support from the council.

Local environmental groups have accused the city of failing to fulfill its commitments under the 2015 Climate Action Plan due to a lack of planning and funding.

Elo-Rivera said he expected the full council to vote on the plan by late July or early August.