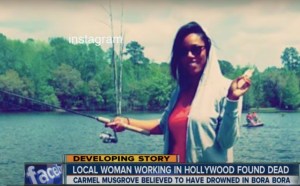 A state appellate court has upheld a judge’s exoneration of a film producer who faced civil liability in the 2015 drowning death of his assistant, a woman whose parents reside in San Diego County.

Carmel Musgrove, 28, died during a 2015 trip to Bora Bora with producer Joel Silver.

Ruling Thursday, the three-justice panel of the Second District Court of Appeal found that Los Angeles Superior Court Judge Dennis J. Landin ruled correctly in February 2021 by granting producer Joel Silver’s motion to dismiss the part of the wrongful-death case filed against him by Musgrove’s parents.

ABC 10 News reported that the family is from La Mesa.

The plaintiffs had maintained that Silver should be held secondarily liable for the actions of his chef in allegedly plying their daughter with alcohol and drugs before she drowned.

Silver’s lawyer, Matthew E. Voss, argued that Musgrove’s death was not foreseeable on the part of his client and did not occur during the course and scope of the producer’s employment of his chef, Martin Herold.

Silver “in no way made it a custom or benefited from Herold’s conduct in supplying Musgrove with alcohol and drugs during a late-night rendezvous in a private bungalow,” Hoffstadt added.

Silver was in Bora Bora for the honeymoon party of actors Jennifer Aniston and Justin Theroux, who have since divorced, when the nude body of his personal assistant was found floating in a lagoon near the Four Seasons hotel at 1 a.m. on Aug. 20, 2015.

Autopsies in French Polynesia and in San Diego County concluded that the likely cause of death was drowning with drugs and alcohol as contributing factors, along with fatigue and heat stroke.

Ronald and Ann Musgrove brought their lawsuit in August 2017, alleging that their daughter had been overworked and furnished with cocaine during the trip by Herold, with whom she was allegedly in a romantic relationship.

In a sworn declaration submitted in November in support of dismissing the part of the case against him, Silver denied having any liability for Herold’s alleged actions. He maintained his practice is to promote and maintain a drug-free working environment.

“Mr. Herold was not acting within the course and scope of his employment as my family’s personal chef during the Bora Bora trip at the time Mr. Herold and Ms. Musgrove allegedly consumed alcohol and drugs prior to her death, and when Ms. Musgrove allegedly went swimming in the lagoon at night near her bungalow at the Four Seasons Hotel during the Bora Bora trip,” Silver said in his declaration. “Mr. Herold was not acting as my employee or agent at that time.”

Silver also said he did not “promote any dangerous activities” during the trip, including alcohol and drug consumption or swimming in a lagoon late at night during unfavorable weather conditions, and thus “I did not create any conditions that placed Ms. Musgrove in peril or danger during the Bora Bora trip, or at any other time, which allegedly resulted in her drowning.”

But Musgrove’s parents’ maintained the evidence showed Herold’s actions with their daughter were within the scope of his employment with Silver.

“It is clear that Silver’s established custom and practice was for his staff and employees to accompany him on his vacations to perform work for him and that they were expected to engage in recreation while on the trip,” their court papers stated. “The trip to Bora Bora was not the first family vacation on which Silver brought both Herold and Musgrove. Silver typically took two family vacations per year and would routinely bring Musgrove and Herold on such vacations.”

On previous trips to Bora Bora, Silver arranged for Herold to stay at the Bora Bora Hilton instead of at the Four Seasons with the rest of his group, according to the plaintiffs’ court papers.

“On this occasion, however, Silver had Herold stay at the Four Seasons, a decision that was obviously made for Silver’s own benefit and convenience so that Herold would be easily available when needed,” the plaintiffs alleged.