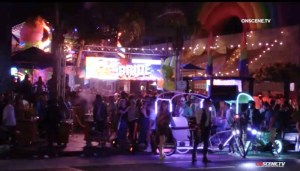 More than 265 entrants marched in the Saturday morning parade from Hillcrest to Balboa Park.

“Attendance numbers did not break our record, but it was a beautiful return to large scale after two years of virtual Prides,” Chloe Janda of San Diego Pride said.

“Our LGBTQ community and allies worked together for over a year in what felt like the largest and most celebratory family reunion imaginable,” he said. “Beautifully diverse crowds of people from around the world filled our city with love and celebration.”