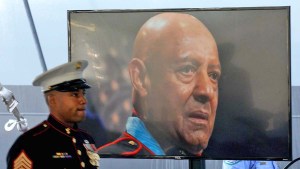 The late Sgt. Major John L. Canley, the first Black Marine to receive the Medal of Honor while living, was celebrated Saturday with a christening of an Expeditionary Sea Base ship named after him.

Canley rescued more than 20 fellow Marines under enemy fire in Vietnam during the 1968 Battle of Hue City. Besides the Medal of Honor, Canley also received the Bronze Star with Combat “V” and the Purple Heart.

Patricia Sargent smashes a champaign bottle to christen the USNS John Canley, named after her father. Photo by Chris Stone

Patricia Sargent, daughter of John Canley, smiles after christening a ship named after her father. Photo by Chris Stone

Vice Adm. Ross Myers salutes the flag during the national anthem during the christening ceremony. Photo by Chris Stone

The future crew of the USNS John Canley attends the christening ceremony. Photo by Chris Stone

Canley, 84, died of cancer May 11 in Bend, Oregon. His daughter was present as ship sponsor.

Fellow Medal of Honor recipients and military leaders, along with the future crew, also were present at the ceremony alongside the 784-foot ship.

Expeditionary Sea Base ships are highly flexible platforms that can be used across a broad range of military operations, including Airborne Mine Countermeasures, Special Operations Forc and limited crisis response.

Acting as a mobile sea base, these ships have a 52,000-square–foot flight deck to support MH-53, MH-60, V22 tilt rotor and H1 aircraft operations as well as launch and recovery of unmanned aerial systems.

Its sustained speed is less than 15 knots with a maximum speed of 17 knots.

Said Patricia A. Sargent, Canley’s daughter: “It comes down to one very simple thing, and that’s choice. We all have to be positive … all have to have the courage. That’s what brings our success.”

She concluded: “And his hope is that every member, every captain, that runs the ship, makes that choice to be positive and … have courage in every mission that they’re given.”

The USNS Robert E. Simanek, the next in the series of ESB 7 ships, is under construction at NASSCO.