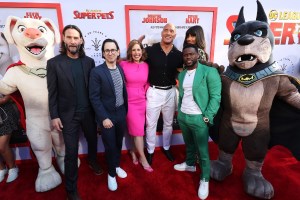 “DC League of Super-Pets” opened with $23 million at North American theaters to lead all films this weekend, according to industry estimates released Sunday.

Can’t get enough of these super pups from @bestfriends? Catch the last family movie event of the summer, DC League of Super-Pets, in theaters today! Get tickets for #DCSuperPets: https://t.co/RY8s7Stm4V pic.twitter.com/yzcTSQH56L

“Thor: Love and Thunder” was third, grossing $13 million Friday through Sunday in its fourth week of release.

“Minions: The Rise of Gru” was fourth with $10.8 million in its fifth week, followed by “Top Gun: Maverick,” which took in $8.2 million in its 10th week and surpassed the $650 million mark in theaters in the United States and Canada.

This weekend’s overall estimated three-day box office grosses are $98 million. The year-to-date total is up to $4.858 billion — an increase of 195% over 2021’s figure, according to Comscore.

The month of July crossed $1 billion, the first month to do so since December 2019.