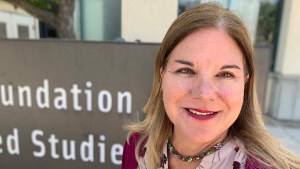 Deanna Mackey returns to her former longtime employer after seven years. She worked for KPBS for 25 years. Photo by Ken Stone

When Doug Myrland retired at the end of 2008 as KPBS general manager, a national search for the leader of San Diego’s public radio and TV station yielded two finalists — Tom Karlo and Deanna Mackey.

CalPERS letter to Deanna Mackey on her KPBS salary. (PDF)

Karlo got the job. Mackey gets the last laugh.

In late April, broadcast veteran Mackey was named Karlo’s permanent successor. Not announced was her base salary — and the fact it tops Karlo’s by 10%.

(Mackey must give up her annual state pension of nearly $37,000 from having worked her way up KPBS ranks until her 2015 retirement as the station’s COO, CalPERS said.)

That group — Public Media Women in Leadership — has among its aims helping “better prepare women with potential to become future CEOs/COOs in the system.”

Mackey says she was among four finalists for GM, recruited in February after another national search was launched in December 2021 — a year after Karlo retired, giving way to interim GM Nancy Worlie.

The press release telling her selection touted her Latin ancestry. She became “the first woman of color to lead KPBS.” (She’ll be working full time starting in August.)

Mackey’s full name — Deanna Martin Mackey — suggested to some that her middle name was pronounced Mar-TEEN per Spanish. In fact, Mackey’s father (Michael Martin) is Irish-American, she said in an interview.

Her still-living mother Connie —whose maiden name is Velazquez — is from Nicaragua.

When Deanna Maria Martin was first married — to Robert Mackey until 2009 — she took his last name. They had two daughters and a son, with the youngest girl soon heading to Cal Poly San Luis Obispo.

Deanna Mackey’s wedding announcement in the Petaluma Argus-Courier in 1990. Image via newspapers.com

Now she’s the incoming leader of San Diego’s NPR and PBS affiliate, the region’s No. 2 radio station (and sometimes No. 1 in audience ratings). A recent interview reveals Mackey’s plans for programming, staffing and fund-raising — and new details of her personal history.

Mackey was born in San Francisco and grew up in Petaluma — one of two sisters. She was a champion grade-school swimmer with the Petaluma Swim Club, hit home runs in girls softball and graduated from Petaluma High School in 1983, a regular member of the Honor Roll.

Deanna Martin posed with her softball team in a 1981 newspaper ad. Image via newspapers.com

The 1988 SDSU journalism and political science graduate (and top editor of The Daily Aztec) married Robert William Mackey Jr., a Domino’s Pizza area supervisor, in February 1990 at historic St. Joseph’s Church in San Francisco, according to her local newspaper. They made their home in La Jolla.

After working at a bridal magazine in Encinitas, Mackey joined KPBS in 1990 as managing editor of On Air magazine. Then she climbed the ladder from KPBS media relations coordinator to PR director to associate general manager (in 1998) and eventually station manager and chief operating officer (in 2009).

Along the way, she founded One Book One San Diego — the community reading program and partnership with local library systems.

In August 2015, she became president and executive director of the 40-station Public Television Major Market Group, which “strives to develop and implement high impact, financially sustainable business models for public media that enable us to best serve our communities.”

So how will Mackey steer KPBS in a time of fractured media habits and declining revenues?

Her newsroom will be happy to learn that more layoffs aren’t in the offing — two years after KPBS cut three union staff members and sliced hours of 15 others by half.

“I don’t see that as a concern in the near future, based on what I’ve seen of the budget,” Mackey said in a conference room interview late last month at the San Diego State University Research Foundation, which operates the multimedia station.

She doesn’t think the audience will notice any changes.

But while being interviewed for the job, she said, “I did talk about where I think there are opportunities.”

Acknowledging that the station has “fantastic content” and does a “really good job serving the community,” Mackey said she’d be looking at ways to serve certain audiences “more deeply” and create “more experiences for them around the content, whether that’s events or virtual experiences, etc.”

She specified the Latino community and young people for engagement, especially SDSU and other college students.

Mackey confirmed that KPBS has been working to boost Hispanic sourcing in its reports — with a goal of 35% of those quoted in stories.

“I don’t know about its status, but I do know that in the station’s strategic plan it is detailed about the station’s diversification of sourcing,” she said, “and even when I was here seven years ago the station was moving toward that.”

She called it “very important” to have sourcing from all elements of the community. “And the Latino community in San Diego is large and growing.”

Mackey said she’d address any questions about newsroom diversity “in a few months because I’m still meeting everybody. There are a lot of new people since I left seven years ago that I don’t even know.”

(One of her goals is to meet everybody, “whether in person or virtually over the next six months,” she said. She’s conducting one-on-one meetings now.)

KPBS has tried a variety of ways to raise money — tweaking its radio “pledge breaks” over the years as well as looking for big-money donors via estate planning and wills. But Mackey says the station will “continue to make” more investment in digital fund-raising.

“The future audiences are all going to come from digital,” she said. “So in order to plan for the future, you have to keep serving the audiences you have but recognize that pretty much the majority of viewers under 65 are accessing our station and other stations’ content through on-demand, through streaming, through digital services.”

Due to the pandemic, she said, digital access to KPBS is happening “even faster than everybody anticipated.”

The 60,000-member station needs to engage large and diverse audiences, she said.

“They’re … much broader in age in digital. They’re more ethnically and racially diverse on digital,” Mackey said. “So understanding those audiences better, figuring out how to get them to use the content more digitallly and feeling engaged enough to give (money) digitally is really where the future is.”

Would this entail less reliance on what some listeners consider annoying pledge breaks?

“I don’t know yet exactly how that impacts broadcast pledge,” she said. “I think a lot of the data that’s come out has been pretty recent and so all stations are grappling with how you create that balance.”

For sure, KPBS will continue having two fund-raising arms — a small-donor effort and a major-donor development department.

“I think you absolutely have to do both,” she said. “Major donors allow funding of projects that might not have been able to be funded quickly — whether it’s capital or initiatives. Major donors can be individuals or can be family foundations, or granters, etc.”

Another thing unlikely to change is KPBS’ focus on local news and cultural information. That path was set by Karlo, who expanded the newsroom, and predecessors who shed programs (like “A Way with Words”) that were syndicated nationally.

“As COO (with GM Karlo), we worked together to build the newsroom, and I think that in this market, the need for news and the need for balanced content like KPBS provides is really critical,” Mackey said. “I think that it’s not that KPBS could not create content that goes national, but certainly on the news side they do. Their stories end up on NPR and on the ‘NewsHour.’ But the core need in this community now is to be served locally.”

But changes are in store for inewsource, the nonprofit investigative outlet with KPBS as its primary partner.

“I think it’s evolving because when we move back into the building, it’s my understanding they’re not going to be embedded anymore,” Mackey said. “But there will still be the content partnership, which I’m very happy about.”

(KPBS headquarters at 5200 Campanile Drive on the eastern edge of SDSU is undergoing a $50 million, 56,000-square-foot renovation and expansion. Its “nondescript” building has been called “drab, gray and depressing.” It’s due for completion in November.)

NPR and PBS have been slammed for an alleged liberal bias.

Mackey — a former Democrat who in the past decade has registered as “No Party Preference” and American Independent — cites her journalistic training when asked about how KPBS will balance political coverage in the era of the Big Lie.

“I would say the station has an obligation to have both sides heard,” she said. “So obviously if you’re a Republican candidate … if we’re having the Democratic candidate … to have a chance to speak.”

But she counts on her reporters and editors to check the information a person would potentially say in an interview and “call them out on it — if it is not accurate.”

“I think we saw that on NPR recently,” Mackey said. “It was very skillfully done, with a candidate who was advocating a lot of information that is just … not true and not factual.”

She says a KPBS staffer would be expected to counter: “You’re saying this, but the [vetted] facts … are showing this” other thing. “That does happen and people, they don’t like it, but I think we have an obligation to be telling the truth.”

One topic she wavers on: Would her new job be her last?

“I would say probably,” she began. “You know, I’m really excited about this job. I am completely honored to be able to come back and be the leader and implement a culture of inclusion with the staff and engagement with our audience and members.”

Then she added: “But you never know what’s coming down the pike. I don’t know if another opportunity will come down. I’m not planning on it. I’m not expecting it. So I don’t know.”