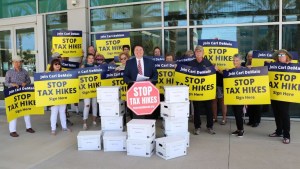 Carl DeMaio with boxes of signatures outside the Registrar of Voters on Tuesday. Photo courtesy of Reform California

The measure, which if it qualifies would likely be on the 2024 ballot, would require voter approval of all new state taxes and many types of fees.

For new local taxes, a governing body would have to approve by a two-thirds majority any taxes it proposes, and voters’ approval would also be necessary..

“Californians already pay the highest income tax, the highest sales tax, the highest gas tax, and some of the highest property taxes in the nation — and state politicians continue to raise them,” said DeMaio. “It’s time to take action and stop the constant tax hikes that are crushing California’s families.”

The measure was approved by the Secretary of State for signature gathering in December, but the deadline for the 2022 ballot was June 6.