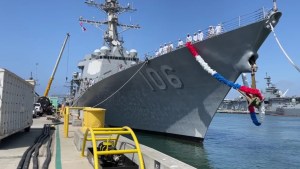 The USS Stockdale returned to San Diego Friday following a year-long deployment as part of Carrier Strike Group One in the Hawaiian Islands operating area and operations in the western Pacific.

“I’m humbled to serve alongside a crew that conducts themselves with the utmost professionalism and excellence in everything we do,” said Cmdr. Justin Bummara, the commanding officer aboard Stockdale. “Stockdale’s crew is made up of some of the most resilient sailors in the Navy. This deployment would not have been as successful as it was without our fortified mentality and dedication to service, as well as support from our loved ones back home.”

The ship’s crew participated in Large Scale Exercise 2021 in August, Operation Malabar and Maritime Partnership Exercise 2021 in October, Annual Exercise 2021 in November, and U.S. and Australia’s bilateral exercise in December and Expeditionary Strike Force and dual carrier operations in January 2022.

Stockdale’s sonar dome was damaged in January, and repairs were made in Yokosuka, Japan. During that period, the ship was assigned to Task Force 71. After the damage was repaired, Stockdale began its journey home.