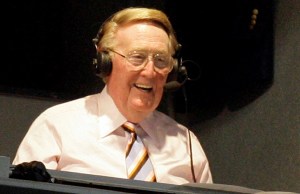 The Los Angeles Dodgers will pay tribute to Vin Scully before Friday night’s game, the first at Dodger Stadium since their beloved legendary broadcaster’s death Tuesday at the age of 94.

The tribute will be broadcast by SportsNet LA.

Fans will also have the opportunity to pay their respects to Scully at various locations throughout Dodger Stadium. Behind the Vin Scully Press Box, which was named after the Dodger icon in 2001, the “I’ll Miss You” banner from his last game at Dodger Stadium will be on display.

A new tribute to Scully will be added to the display case in the Dodger Stadium lobby. Miniature versions of Scully’s microphone from the Dodgers’ Ring of Honor will be placed on any existing Scully displays at Dodger Stadium, with fans encouraged to stop for a moment whenever they pass one of those icons to read about Scully’s life and legacy.