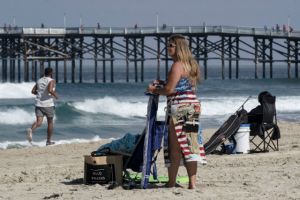 A woman wearing a dress depicting an American flag is seen on Pacific Beach. REUTERS/Bing Guan

As the United States gets ready to celebrate its 246th anniversary on Monday, events throughout San Diego County can keep citizens in red, white and blue all weekend long.

Saturday will kick off Independence weekend with Coronado’s 2022 Crown City Classic 5k and 12k races at Coronado Tidelands Park, 2000 Mullinex Drive. Enjoy live music at the main stage as well as Taiko drummers along the course.

On Sunday, Oceanside will host a fireworks display at SoCal Soccer Complex at El Corazon, 3300 El Corazon Drive, in celebration of Oceanside’s 134th anniversary of the city’s incorporation. Fireworks will begin at 9 p.m. There will be food available onsite beginning at 5:30 p.m. This year’s event will feature live entertainment, a family fun zone with inflatables, a picnic area and food vendors.

Coronado will continue Independence Day events with a concert in Spreckels Park, 601 Orange Ave., at 6 p.m., a circumnavigation of the “island” bike ride at 6 p.m. and an all-class reunion at 6:30 p.m. 601 Orange Ave.

The Gaslamp Quarter will host its Third of July Laser Show along Fifth Avenue downtown. The Budweiser Clydesdale horses will make an appearance beginning at 4 p.m.

On Monday, nearly every city in the county will have some festivities to celebrate the Fourth of July. Here’s an inexhaustive list:

— Vista will begin the party with its Independence Day celebration at Brengle Terrace Park. Park opens at 7 a.m., Moonlight Amphitheatre opens at 5 p.m. The DecaDames will perform at 7:35 p.m. and again after the fireworks, which begin at 9 p.m.;

— The Coronado Independence Day Celebration will begin with a parade at 10 a.m., Navy Leap Frogs aerial demonstration at 2 p.m., several concerts at multiple locations at 4 and 5 p.m. and fireworks at 9 p.m. over Glorietta Bay, near Stingray Point. Coronado Golf Course, 2000 Visalia Row;

— Julian will host its 27th annual 4th of July Parade down Main Street at noon;

— The Ramona July 4th family picnic and fireworks show will begin at 4 p.m. at Olive Peirce Middle School with food vendors, a DJ, face painting and fireworks at 9 p.m.;

— Escondido will host its 57th annual Independence Day Festival & Fireworks at California Center for the Arts, Escondido beginning at 5 p.m. The day’s activities include a concert on the Great Green in Grape Day Park with country music star Lorrie Morgan followed by the Third Marine Aircraft Wing Band, concluding with a fireworks display at 9 p.m. 321 N. Broadway;

— The Rancho Bernardo “Spirit of the Fourth” event will kick off at 6 p.m. on the athletic field of Bernardo Heights Middle School with live entertainment by Barbara Green, Slip Ridge and Shark Jones. Fireworks begin at 9 p.m. 12990 Paseo Lucido;

— Poway will host An Old Fashioned Fourth of July & Fireworks, with gates opening at 6 p.m. Event features games, activities and a DJ spinning tunes. Fireworks will begin at 9 p.m. over both Poway High School and the Poway Sportsplex. 15500 Espola Road;

— The National City Lions Club will conclude a weekend long carnival at Kimball Park at 12th and D Streets. The carnival includes rides, games and food with fireworks at 9 p.m.;

— Imperial Beach will host a drone light show from the pier for its Independence Day 2022 at 9 p.m. Marine Band San Diego will perform at Pier Plaza Stage at 7:30 p.m. Pier Plaza, 940 Seacoast Drive;

— SeaWorld San Diego will hold the fourth and final night of fireworks at the theme park at 8:50 p.m.. Show will take place over Mission Bay. 500 Sea World Drive;

— El Cajon will host fireworks at Kennedy Park at 9 p.m.;

— The San Diego County Fair will conclude with a firework display at 9 p.m.; and

— The world famous Big Bay Boom will kick off in North San Diego Bay, as fireworks are launched from four barges. The show can be viewed from Shelter and Harbor islands, the Marina, North Embarcardero and Coronado Ferry Landing, among other locations. Show can be watched live on San Diego’s Fox 5 or Los Angeles’ KTLA 5, with a music radio simulcast at 101.5 KGB.

“The Port of San Diego is proud to sponsor the Big Bay Boom,” said Port of San Diego Chairman Dan Malcolm. “This is one of the port’s major annual holiday events and one that the region’s residents and visitors look forward to every year. It’s also an incredible economic boost for businesses that operate on and around San Diego Bay.”

Worried about getting around to all these festivities? Fret not, as the North County Transit District is adding special event service with extra SPRINTER trips on Sunday and increased service on BREEZE and COASTER as well on Monday.

The Metropolitan Transit System will also increase service around the Padres game at PETCO Park and, later that day, the Big Bay Boom Fourth of July fireworks. Buses and Trolleys will be operating on a Sunday service schedule most of the day, but MTS will be increasing Trolley service to accommodate the crowds pre- and post-fireworks show.

As much as many of us love fireworks, most furry friends decidedly do not. The County Animal Services Director Kelly Campbell suggests some tips to keep Fido safe.

“We suggest if your dog has a problem with loud noises or if you are not sure how your dog will react, it should be kept inside your home in the most noise-insulating room available to keep it secure and as calm as possible,” Campbell said. “As a backup plan, in case it still manages to run away, we recommend microchipping your pet.”

Other tips include not taking pets to fireworks shows, removing dangerous objects they might chew nervously, see if anxiety medication is right with your veterinarian and under no circumstances should you leave an animal in the car.

If you find a lost pet in the unincorporated area of the county after the fireworks, call County Animal Services’ 24-hour emergency dispatch number at 619-236-2341 so the animal can be cared for at the shelter. If you lose your pet, check the department’s lost and found page online.

If you see your dog is at County Animal Services, you can pick up your pet starting at 9:30 a.m. on Tuesday.

After all the fireworks, barbecues and partying, there tends to be a mess to clean up, so Surfrider Foundation of San Diego County will host the “Morning After Mess” beach cleanup at seven locations around the county, including Ocean Beach Pier, OB Dog Beach, Mission Beach, Fiesta Island, Pacific Beach, Moonlight State Beach in Encinitas and near the Oceanside Pier. More information can be found at https://sandiego.surfrider.org/morning-after-mess- july-5th-beach-cleanup-series/.