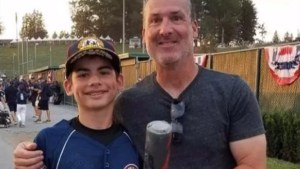 A 20-year-old man who drove unlicensed and under the influence of drugs when he plowed into another vehicle at high speeds on a Poway road — killing a man and his 13-year-old son — was sentenced Tuesday to eight years in state prison.

Donald Lee Farmer was under the influence of marijuana and Xanax at the time of the Feb. 12, 2021, crash that killed 54-year-old Stephen Pirolli and his teenage son, Stephen Pirolli Jr., according to prosecutors.

The Pirollis’ Toyota was broadsided at about 7 p.m. on Espola Road, killing the elder Pirolli at the scene, while his son was taken to a hospital, where he was pronounced dead.

The younger Pirolli was attending baseball practice at Poway High School on Feb. 12, and the victims’ car was turning left out of a parking lot at the school when it was struck.

Prosecutors say Farmer was driving around 90 mph at the time of the crash, while the speed limit on that stretch of Espola Road is 45 mph.

Farmer pleaded guilty earlier this year to charges of gross vehicular manslaughter while intoxicated and driving without a license.

Deputy District Attorney Laura Evans, who sought a 12-year sentence, argued a higher prison term was warranted for, among other things, Farmer’s awareness of the effects of the drugs he was taking. The prosecutor said Farmer stated that he took the Xanax just before getting behind the wheel with the hopes that the drug “wouldn’t kick in until he made it to his destination.”

Farmer did not make a statement at his sentencing hearing, but his defense attorney, Reem Khalil, said her client was “deeply sorry” for what happened and “feels ill” on a daily basis over it.

“If he could trade his life for theirs, he would,” Khalil said.

Khalil sought a four-year sentence, arguing that Farmer’s young age and childhood trauma he suffered required the court to impose a low-term sentence, per recent changes to state sentencing law.

San Diego Superior Court Judge Rachel Cano agreed with Khalil’s interpretation of the law, but said she could impose more prison time if the low term would be “contrary to the interests of justice.”

In doing so, Cano ruled that certain actions Farmer undertook immediately after the crash called for a higher sentence.

Those included facts testified to at Farmer’s preliminary hearing, such as asking a witness at the crash scene to go into his car and remove drugs from the vehicle.

Cano also referenced Farmer lying to police about the circumstances of the crash. Sheriff’s Deputy Ryan Christy testified that Farmer told him he was driving around 45-50 mph at the time. He told Christy that the Pirollis’ vehicle was driving in the lane to his right when their car suddenly made a U-turn in front of him, Christy testified.

Ten family members and close friends of the Pirollis spoke at the sentencing hearing, including Lorie Pirolli, widow to Stephen Sr. and mother to Stephen Jr., who said she has lost the chance “to grow old together” with her husband “and watch our son grow into a young man.”

Since their deaths, Lorie Pirolli said she’s felt “a void of loneliness that I’m not sure I’ll ever be able to recover from.”

She said, “There’s days and moments I’m not sure how to move on or move forward, but somehow I find the courage and energy to make it happen. And I believe it’s because it’s what Steve and Stephen would want me to do.”