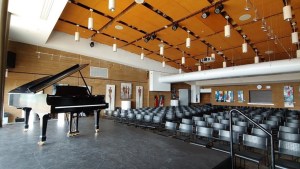 The Encinitas Library community room, home to the Music by the Sea series. Photo credit: Encinitas.ca.gov

The Encinitas Music by the Sea series opens next month with a pianist described as “a rising star of international acclaim.”

Other artists set to appear monthly (skipping December) include the Shining Sound Ensemble with the soprano Marina Hovhannisyan and the much-honored Max Beitan and Jacopo Giacopuzzi.

Beitan has won five Grand Prix Awards; between them, he and Giacopuzzi have prevailed in nearly 30 international competitions.

The season, with shows set for 7:30 p.m. on Fridays, continues through June 16. The series includes performers from national auditions held in Beverly Hills.

The concerts take place at the Encinitas Library, with an expansive view of the Pacific Ocean. Advance tickets cost $20 for individual shows or $145 for the nine-show series.