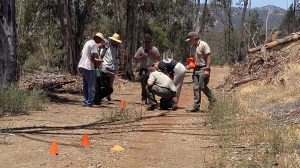 During the event, which included staff from the Center for Natural Lands Management and Elfin Forest Recreational Reserve, instructors focused on teaching identification techniques of small, medium and large mammals. For example, the attendees learned the difference between feline and canine tracks.

“We saw mountain lion, deer, skunk and squirrel tracks,” said Juan Troncoso, conservation manager for the Escondido Creek Conservancy. “We could also see owl pellets, bird whitewash (bird poop) and quail tracks. Often these animals do their best to avoid humans. Being able to identify tracks gives us an idea of the type of animals present, which can be a clue to the health of the ecosystem.”

Canine tracks generally have a vertical oval shape with four toes and a heel pad. The third and four toes are parallel with a toe tuck behind them neatly.

Animal tracks have very distinct characteristics based on their physiology. For example, some animals like mountain lions carry more weight on their front legs therefore their front paws are bigger than their hind paws.

Other smaller animals like raccoons carry more weight on their hind legs so their hind track is bigger. If the animal climbs, digs, stalks prey or runs away from predators, this will determine the characteristics of their paws.