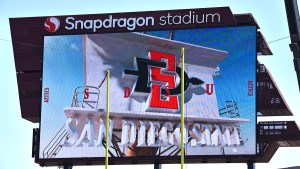 More than a dozen media reps were given a two-hour tour of Snapdragon Stadium.

Afterward, school and community members gathered for a ribbon cutting to celebrate the 35,000-seat venue near the old site of the Chargers and Padres stadium.

SDSU President Adela de la Torre pointed to plans for murals, sculptures and portraits by students and local artists. As to the new stadium: “Nearly 90% of the old stadium was recycled or reused on site.”

The stadium will see its first football game Sept. 3, when the Aztecs host the University of Arizona Wildcats.

“SDSU Mission Valley has always been about community – people, our families, our children, and the generations of those who will follow us,” de la Torre said. “The shared vision and plan for this site was seeded by our community.”

Premium seating is close to the bottom level to bring fans closer to the action, while the “Sycuan Piers,” inspired by San Diego’s coastlines, provides spectators a unique view as a portion juts out toward the field.

“We appreciate all the hard work to get Snapdragon Stadium complete in time for our first game against Arizona,” said J.D. Wicker, SDSU athletic director.

“We are looking forward to fans coming to a stadium that they can be proud of – a stadium that is authentic to San Diego,” Wicker said. “We feel we’ve created an unmatched experience in collegiate athletics, and in all events that come to the stadium.”

Snapdragon Stadium is the first part of the development of SDSU Mission Valley.

Earlier this year, the university broke ground on the river park expected to be done by the end of 2023. The university is also in the process of selecting developers for the first Innovation District and residential projects.