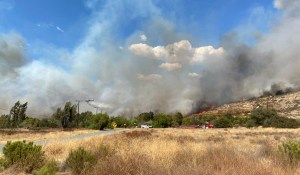 The wildfire burning in the Barrett Junction area has grown to more than 150 acres. Photo via @CALFIRESANDIEGO Twitter

The blaze erupted for unknown reasons about 2:30 p.m. off Barrett Lake Road, near state Route 94 in the Barrett Junction area, roughly three miles north of the U.S.-Mexico border, according to Cal Fire.

Within a little more than an hour, the flames had blackened more than 150 acres, the state agency reported. By then, one structure of undetermined type was known to have been destroyed by the fire.

As firefighters worked to subdue the fast-moving blaze, deputies went door to door on and east of Round Potrero Road in Potrero, directing residents to clear out of their homes for their own safety, and emergency crews shut down a stretch of SR-94 near Bowmans Road, according to the San Diego County Sheriff’s Department.

Here are the temporary evacuation points for the #Border32Fire:

People with pets were urged to take them to the county animal shelter at 5821 Sweetwater Road in Bonita.