‘Feeling of Hopelessness’: Migrant Advocates Call for End to Family Separations at Border 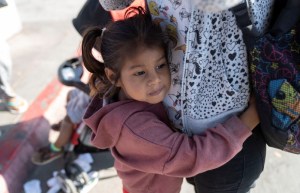 A girl hugs a relative outside a migrant camp near the El Chaparral border crossing in Tijuana. REUTERS/Toya Sarno Jordan

Migrant advocates in San Diego called attention Tuesday to the continued separations of families at the U.S.-Mexico border, which they highlighted with the story of a woman from El Salvador who they say was assaulted by a U.S. Border Patrol agent and kept apart from her children for months.

The woman, referred to only as Lucy, was arrested in February by Border Patrol agents, one of whom allegedly punched her several times, then claimed Lucy had assaulted him.

BREAKING NEWS: Families are still being separated at the border. Lucy, a mother who fled violence in El Salvador, was separated from her 3 children following a brutal assault by a U.S. Border Patrol agent, which unjustly resulted in charges against her.https://t.co/Cyxx9SZM7u pic.twitter.com/N30GZ3z1OS

In a letter dated Tuesday to U.S. Department of Homeland Security Secretary Alejandro Mayorkas, Jewish Family Service of San Diego, the American Civil Liberties Union Foundation of San Diego and Imperial Counties and the UCLA Center for Immigration Law and Policy said Lucy and her 10-year-daughter, 18-year-old son, and 18-year-old stepson fled violence in their home country and sought asylum in the United States.

But the arrest landed her in federal custody, during which time the letter states she was given no information on the whereabouts of her children.

Federal prosecutors moved to dismiss her case in May, but she remained in ICE custody for about two more months.

In a statement released by Jewish Family Service, Lucy said, “For one period, I didn’t know where any of my children were. It was a feeling of hopelessness I cannot describe. At that point, I considered taking my own life. My children are everything to me, and their safety is all I care about — just as any mother can understand — which is why we escaped from El Salvador in the first place.”

“At no point did CBP, the U.S. Attorney’s Office, ICE or ORR (Office of Refugee Resettlement) attempt to reunify Lucy with (her daughter) Mariela, even after the dismissal of the criminal case,” the letter states.

The Border Patrol and the DHS did not immediately respond to a request for comment on the allegations.

In their letter, the organizations urged the DHS to pursue efforts to prevent separations, including expanding the Biden administration’s Family Reunification Task Force to cover ongoing incidents of family separations, rather than just separations that occurred during the previous administration.

They also called for an investigation into the Border Patrol agents involved in Lucy’s arrest and alleged attack.

“U.S. Customs and Border Protection continues to callously separate families who have fled harm in search of protection. This disregard for family unity compounds their trauma, jeopardizes due process and risks permanent separations marked by international borders,” said Esmeralda Flores, a senior policy advocate with ACLU-SDIC. “Our government’s response to this ongoing problem has been grossly insufficient. DHS must implement prevention-based policies against separation that treat all families with dignity and respect.”