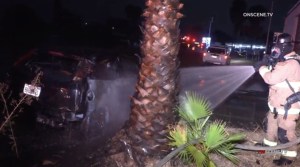 Firefighters works on a car fire that spread to a palm tree in National City. Photo credit: OnScene.TV

National City firefighters responded to a report of a car on fire on Harbor Drive early Friday, the latest in a series of suspicious blazes in the area.

Flames heavily damaged a Ford Focus and also caused a palm tree to catch fire shortly after 4 a.m. according to OnScene.TV,

A fire official told OnScene that “a fire bug (is) working the area” around Harbor and Civic Center Drive.

Vegetation fires have been set nearby, and other vehicles have been burned, including a large trailer last week, approximately 100 yards away from Friday’s fire.

The incidents remain under investigation.