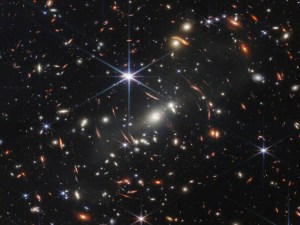 The first full-resolution image from the James Webb Space Telescope shows distant galaxies, many whose images are bent by gravity. NASA photo

NASA released the first full-resolution image from the James Webb Space Telescope on Monday, dazzling scientists with a view of thousands of galaxies as they appeared 13 billion years ago.

The image, which covers a field the size of a grain of sand held at arm’s length, was unveiled by President Joe Biden and Vice President Kamala Harris at a White House press conference.

NASA said the image is “the deepest, sharpest infrared view of the universe to date: Webb’s First Deep Field.” Many of the galaxies appear twisted, the result of gravity bending their light over the vast distances.

Harris described the telescope as opening “an exciting new chapter in the exploration of our universe” by being able “to see deeper into space than ever before.”

The image shows distant galaxies as they appeared not long after the beginning of the universe, and NASA Administrator Bill Nelson said the telescope has the potential to see back in time even farther.

The $10 billion telescope, which underwent final assembly at Northrop Grumman in California, is now in orbit beyond the moon and has completed its calibration and testing.

NASA plans to release more images tomorrow, including one of a Jupiter-like planet orbiting a star 1,150 light years from earth.

The James Webb Space Telescope is packed up for shipment to its launch site at Northrop Grumman’s Space Park in Redondo Beach. NASA/Chris Gunn via REUTERS